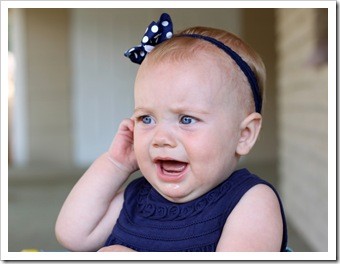 Around 50% of children will experience at least one middle ear infection (otitis media) before they’re one year old. By age three, it’s more like two-thirds. Otitis media is caused by a bacterial or viral infection which may arise from another condition such as a cold and produces a buildup of fluid behind the eardrum, and inflammation inside the ear. Symptoms include ear pain, fever, and irritability. Some children end up suffering this condition on a chronic basis and require treatment year in, year out, with the potential for permanent hearing damage and associated speech problems.

Otitis media usually occurs when the lymph system in the neck fails to drain properly, or the muscle designed to keep bacteria or viruses out of the eustachian tube (connecting the throat to the inner ear) doesn’t work well. It is less common in adults because the eustachian tubes are longer and shaped differently, making for better drainage and less chance for bacteria to invade. Drainage is further enhanced by the fact that adults do not spend as much time lying down as kids do.

Conventional treatment aims to kill the invading bacteria or virus, but this does not attend to the root cause of otitis media. Chiropractic, on the other hand, looks to restore normal drainage to the ears and the lymphatic system of the neck so that the problem has less chance of taking hold. Another negative of treatment by medical doctors is that the drug of choice is usually amoxicillin, an oral antibiotic which repeated use can lead to drug-resistant bacteria, and which is barely any more potent than the body’s own immune response.

An alternative medical treatment is to relieve the pressure and pain by surgical intervention that involves placing drainage tubes in the ears. To do this, a small opening is made in the eardrum and a tube placed into it to release the buildup of fluid. The body naturally pushes the tube out and closes the hole after a couple of months. Although frequently effective, it again does not address the root cause of the problem, namely the incorrect functioning of the lymphatic system, muscles, and nerves.

It is important that you talk to your chiropractor if your child experiences recurrent ear infections. Doctors of chiropractic are experts in diagnosing and treating patients of all ages and will carefully gear their treatment according to the age of the patient. When the normal function of the tissues of the neck are restored, the problem of otitis media very often improves or completely disappears, and the use of antibiotics and surgery can be avoided.